I, Ceredig, was commanded by king Itmar to write the stories of the eleven folowers of king Gudleifr...

Thus Wetemaa begins. Thus comics begins as well. How did the idea to make a comics based on Wetemaa arise?

Well, good question. The idea arised thanks to existence of the excellent cartoonist Petr Kopl and thanks to cooperation with him. Petr ilustrates my books for children ( The Adventurous Expeditions to the Past). Step by step I recognized how pleasant is cooperation with him, how immense is his talent and patiente, how endless is his fantasy, how much he likes refined details, how original ideas  he has and that he works minimaly at 100%. I understood that everytime Petr drows a comics, he makes a film. I think I realized it while watching this picture from the comics "The Hound of the Baskervilles": 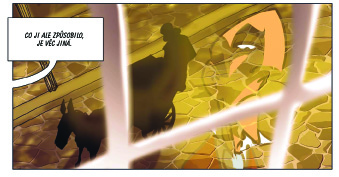 Look at the picture carefully. The view from the window is nothing extraordinary. But note the  unfocused bars. It is a detail - but you can rarely find details like this in comics. It focused your attention to what is happening on the street, but simultaneously it creates the illusion for the reader that it is HE who is in Holmes´study, that it is HE who looks through the window. And Sherlock Holmes stays behind HIM. How artfully Holmes´face reflected in the window! At that moment I knew that Petr is one and only whom I can entrust the book.

However, Petr Kopl is known first of all as a representative of style known as "cartooning". If you know for example his comics "The Three Musketeers", you can hardly imagine that Wetemaa would be drown in this style...

Petr - unlike most of cartoonists - masters various styles. And he know very well which style suited to which topic. If I hadn´t belived that he was able to comprehend the atmosphere of Wetemaa, I  never would have offered him to work on it. He understood that it is impossible to use e.g. style used for drowing stories about Morgana published in Čtyřlístek. The style which he choose for Wetemaa is perfect - it is anough realistic but it is vivid with lot of charm.

Actually, you can see his work on

Can you desribe the work on comics?

Well, it is much more difficult that I ever imagined. Really hard work. It is like to make a film. The first the screenplay have to be written. Then you have to create a style of lot of facts - architecture, fashion, weapons, ornaments, jewelry... Petr, for example, created completly original archaic élladian sacral architecture.

It resembles preparation to epic film. What about "casting"?

You will not believe it - but the "casting" was necessary and it was in my opinion the most difficult part of the work. There is really magnificent introduction to the all saga in the first part of the comics, complete élladian pantheon is introduced here, there are reminiscences of the distant past, in the prophecy of the Gods all eleven followers appear althoug there are only three in the first part of comics...

What? Only three? But there are all of them in the first  book of Wetemaa!

So we can looking forward to many following parts! But back to the casting. How did you do it?

By two ways. When we generated the pantheon I drew the sketches and Petr created the final appearance of the Gods based les or more on these sketches. Sometimes were the final pictures very similar to the sketches and sometimes not, becouse the sketch didn´t portray the God well.

And the second way?

It was simple the work on police identikit. We were sitting hours and hours together by the computer and creating the appearence of Ceredig the Seafarer, of the followers and of the many other important characters. Thus we created e.g. identikit of the most powerful élladian God Orlyg and his son Wanne. 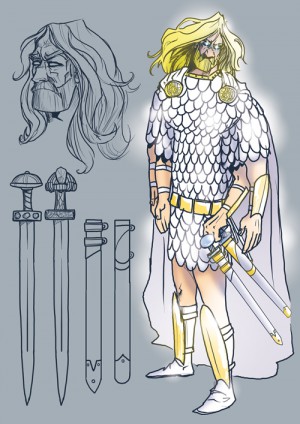 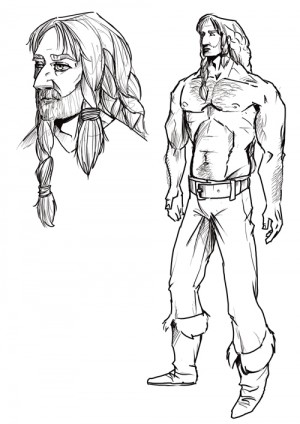 And there are boys in action: 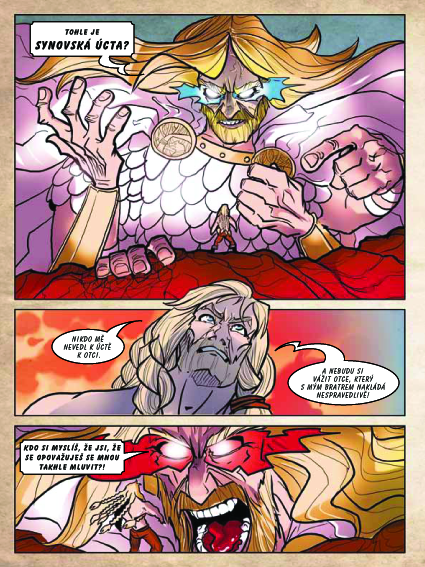 There plays his role Wanne in the first part of the comics? But in the ages of the eleven folowers of king Gudleifr he was dead for four hunderd years!

That is true. But as I said, there is really epic introduction with "historical" reminiscences in the first part. It brings the reader to the ages of the king Ane, it tells why Udi fells out with his brother Már and why Orlyg and Wanne curses each other... And there are some things which you can not find in any published neither prepared book. For example why was king Gudleifr lame. And you can look forward to some still unpublished stories about Sian and Dangrud from the time before they become the followers.

So even the fans who know Wetemaa throughout can find something new in the comics?

Exactly. The comics is both for tyros who never hold Wetemaa in their hand and for those who love the book since its first edition in 1993.

Whom of the eleven followers we will meet in the comics?

Sian the Brown-eyed, Dangrud the Thoughtful and Asgeirr the Healer.

Will you show us atleast their portraits?

No. Be surprised. Their appearence will stay secret till the edition of the comics. But we can look together to the last moments before the First Great Battle by the Mountain Mirabat... 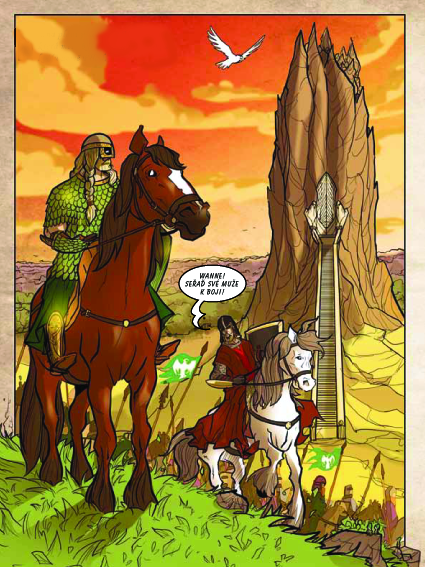 The first volume you can buy on Book World Prague