The Journey to the Dragon Lord’s Palace - extract

Leading from each room were several doors, either into adjoining rooms or onto a staircase, dimly lit and ascending in short flights of broad steps. Morcant mused for a while and then pulled out his dagger, with which, as he ventured further, he would scratch a sign on every door that he passed through, so that he would know it again, and in which direction he had passed before. He had proceeded in this fashion through perhaps nine rooms, when a sudden but insistent prickling in the back of his neck told him that someone was following him. He turned, but could see nothing but wavering shadows on the walls.

He therefore advanced warily, with his ears pricked like a lynx. For some minutes nothing untoward happened, but all at once he heard the swish of a sword. As he leapt aside, the shadow of a hand grasping a weapon swept across the wall opposite him, and, with a clang as of steel striking stone, a furrow appeared in the paving in the very place where Morcant had been standing but a moment before.

Morcant pressed his back to the wall and cast his eyes about him, searching for his assailant. All they could see was the shadow, black and wavering, which had been dogging him unobserved from the ninth chamber. The shadow stretched out an arm with its weapon and swung it again; Morcant evaded the blade and the sword struck in the wooden wainscot, where it remained embedded. As the shadow endeavoured to pull it out, Morcant like lightning leapt at his attacker from the back, and feeling flesh not thin air, he ran the invisible body through with his eighteen-inch dagger. To make certain he stabbed twice more. He heard a death rattle, and something heavy and sticky with blood fell against him. He threw it aside and then groped along the wall until he found the invisible sword, which he pulled out. Running his finger along the blade to gauge how long it was, he found to his satisfaction that it was but a little shorter than the sword he had left in the bedchamber. When he wiped his bloody palm on his clothes the red stains remained. A pool of blood was also spreading across the floor where the corpse of the shadow lay.

Morcant stole cautiously onwards, keeping to the wall, and looking out with falcon eyes for the shadows of other treacherous murderers. He did not for a second doubt their presence, and cursed Merrdin in the vilest terms. His foreboding was well founded, for scarcely had he turned off the dim stairs into one of the larger rooms than he realised he was surrounded by six shadows.

Having learned from the first duel, he waited for them to attack, and only set his own sword against theirs when the black silhouettes moved forward, slashing. As he fought, keeping to the wall to protect his back, he made an interesting discovery: the invisible men were far more conjoined with the shadows than he with his. It was as if their shadows were their second bodies, for all he needed to do to parry their blows was to set the shadow of his own sword against the shadows of theirs. In the same way, if the shadow of his sword hit the shadow of a foe’s body, the scream that followed persuaded Morcant that he had caused a wound.

The shadows circled around him like bats. Although now used to their way of battle, Morcant found it ever harder to defend himself against their treacherous attacks. Even so, he managed to strike one invisible warrior in the breast and was pleased to see the shadow sink to the floor. The others then huddled together, seemingly to take counsel.

Morcant was watching them with anxiety when all at once the hinges of a secret door creaked behind him. He spun about, swinging his sword at the intruder. Harald leapt aside, at least ensuring that Morcant struck not his head, but only his arm.

“Harald, is that you?” Morcant was alarmed to think he had come so close to cleaving his own son’s skull in two.

“I found a secret entrance into the castle,” hissed Harald, trying to staunch the blood welling from the wound with his hand. His legs were still trembling with fright.

“Does it hurt much?”

“A scratch,” Harald wrinkled his nose.

“I am sorry for it, and will bind it up later. But now you must be on your guard. Do you see those shadows?”

He pulled his son into the room, slamming the door, which instantly merged with the wall as if it had existed, and he gestured to the band of shadows. Harald nodded.

“They are the shadows of invisible killers,” Morcant explained in a low voice, “Merrdin has set them on me, I have already killed two. I need you to cover my back.”

Harald drew his sword and stepped up beside his father.

“But you have no sword”, he said to Morcant.

“I have the sword of one of the monsters. Did you think I scratched you with my finger-nail?” 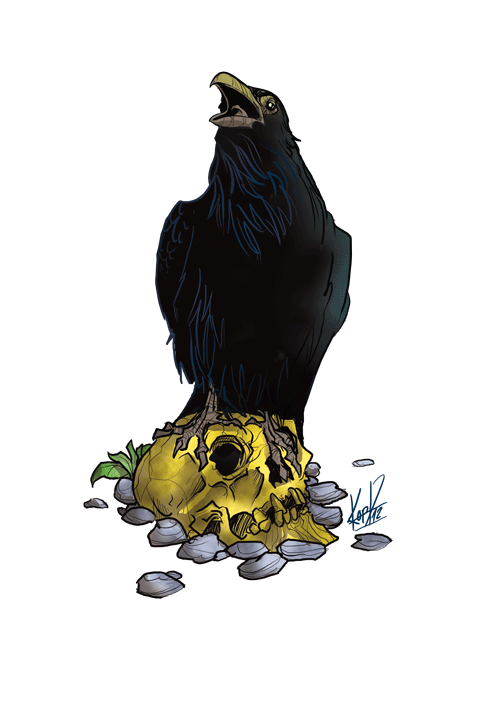