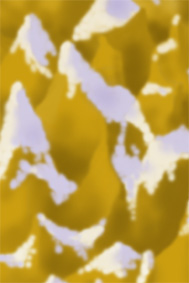 The east boundary of The Land of Éllad is formed by The Dankrad Mountains. Dankrad resembles norvegian Jótunhaimen, but Dankrad is higher. And, first of all, much rougher. This is not only becouse of clima, but becouse of very high concentration of malicious supernatural beings which are missing in Jótunhaimen. There are only few pathes running through Dankrad. Ceredig the Seafarer says that nobody crossed The Dankrad Mountains neither on foot neither on the horseback of the flying horse. Actually, it is not true. There were three people who crossed Dankrad on the flying horse, all of them from the Aurixian tribe - famous hunter and fighter Yarik, vědma Arambegil and her later husband, warrior Njál. There are two possibilities where to cross Dankrad on foot. The nothern way, The Path, begins near to the castle Sergell by The Gate of The Path and goes around The Sanctuary of Wetemaa. Except The Guardians of The Path only three people crossed Dankrad by this way: Wanne, Ailred and Wanne´s best friend Karu, later the first Guardian of The Path. Much more people tried to cross Dankrad by southern way where they could use a help of mountain leaders. This is the way which are the mountain leaders, women from the small village Two Axes,  allowed to see by lady Haduwig.

After retreating to her residence in Attérwind beyond the Dankrad mountains Lady Haduwig gave to women from the small village Two Axes in the south of Éllad a gift of inner sight. Thanks to this gift they were able to cross Dankrad. Not all of them, of course - there was always only one...

This is a complex of caves under the mesa in the souther part of Dankrad mountains. Here created his residence Gunnlaug, brother of the Lord of the dragons Askadrin. Precious stones called the dragon eyes are found in the valley under the mesa and on mesa´s hillside since the time of the combat...

Rá is the highest summit of Dankrad mountains. It is an active vulcan, but compared to the other vulcans its behavior is a bit non-standart. Rá has one central crater and its erruptions are relatively regular. That is why it should have the shape of stratovulcan as e.g. Vesuvius or Fuji. In fact,...

Karu, the best friend of Wanne, built the Sergell Castle in the same place where the hut of his beloved Yrmbegil stood. Yrmbegil tried to cross  the Dankrad mountains over in the times when Karu was a Lady´s Haduwig slave either to liberate him or at least to see him. Despite of innumerable...

The Path leading from the Land of Éllad to the Sanctuary of Wetemaa is since the time of Wanne guarded by the Guard of the Path. The first Guard of the Path was Karu, Wanne´s friend and - except Wanne himself and Ailred - the only man who crossed the Dankrad over  from Attérwid to Éllad by...