Homepage > LIBRARY > Wetemaa - The Book of The Destiny

Wetemaa - The Book of The Destiny 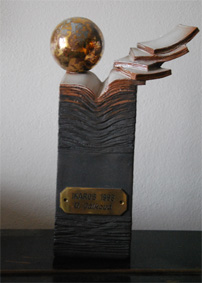 The content of Of the Journey to South Edagwon is incorporated to the chronological order of the story, in this four volumes re-edition, in which respect it differs from the first edition.

Two dynasties have reigned in the Land of Éllad for four centuries – house of Kúns and house of Miltids. They both derive their origin from Ane, the first king of Éllad, both are striving to assert their dominance over the whole land. When Gudleifr, the son of king Ragnar, was born, a book with blank pages appeared in his cradle. When he assumed power, the blank pages started to fill up spontaneously. In this way, Gudleifr found out that he had been chosen to become the unifier of Éllad though born paralysed and what he had been supposed to do to fulfil his destiny. Each of the eleven Élladian Gods sent him one of the excellent men of the land to become his followers. How they managed to get to the king’s service and what they went through before is the subject of the first part of the book. The second one depicts the deeds they made for the king Gudleifr. They passed through the Dankard Mountain Range to fetch Wetemaa (the book of Destiny of the Land of Éllad) from the Sanctuary.  Inside the book, it was written where the magical Silver Horseshoe is hidden. The Horseshoe was originally a gift from Orlyg to his son Wanne and now was supposed to restore Gudleifr’s health since a crippled king cannot unite the land. Bald the Black then went to the basement of his own castle, where his distant ancestor had hidden the Horseshoe and brought it back although it nearly cost him life. The Silver Horseshoe enabled the shoed horse to run in the air which lured Ioann, the son of Gudleifr. Against the king’s ban he borrowed the Horseshoe which finally landed up in the hands of king Widuwalt. Ioann was to blame and Gudleifr had his first born son executed. The followers had to win the Horseshoe back again and this time their journey led to the north to the Rocks where Widuwalt’s sister Itis had her castle. The Reiulf the Merry won the Horseshoe back and although he was finally rescued by his friends he was captured and tortured. His crippled leg was an unpleasant reminder of the castle of Lady Itis. The last task which the followers had to perform for Gudleifr was to bring the remains of Udi, the founder of the Miltids dynasty, from South Edagwon. Even this one was successfully completed as it tells the book Of the Journey to South Edagwon. Nevertheless when they came back a furious war broke out between Widuwalt and Gudleifr. The Lord of the Dragons Merrdin, who loved one of the wives of Gudleifr’s followers (who loved wife of Morcant, one of Gudleir´s followers), took sides with Gudleifr. The contest culminated in the Second Great Battle of the Royal Mountain of Mirabat, where the best Gudleifr’s followers, Sian and Dangrud, were killed. Yet before they killed king Widuwalt together with Tankred the Eagle-Eyed and thus the Land of Éllad was united. King Gudleifr unfortunately died in several months after the battle due to the injuries he sustained. The young king Berohard assumed power, however the pretender claiming to be Widuwalt’s illegitimate child took advantage of his immaturity and won support of the army. The Third Great Battle of the Royal Mountain of Mirabat came about. To help king Berohard win, the phantoms of Sian and Dangrud left their tombs and thus abided the oath given to Gudleifr even after death. Finally, Berohard married the only daughter of Gudleifr, Betlindis, and the Land of Éllad was united by sword as well as by marriage.